This morning I woke up to the smell of dog poop.

6:37 am. Wanda May had gotten out of bed, which I had sensed, and I had waited for her to scratch at the door. I heard her squirreling around, and then she came back to bed.

Good. Back to sleep. But then…

Sniff. Sniff. Are you freaking kidding me?!?

So I get up, grab some toilet paper, pick up the offending smell and plop it in the toilet, grabbing the carpet cleaner as I head back into the bedrooom.

Thankfully, it wasn’t the runny, sticky, nasty kind. It just sat on the carpet for a minute, leaving no trace. Whew.

Meanwhile, my husband is soundly sleeping in bed while Kosmo, Wanda, and Georgie (yes we have three dogs in our bed. Yes something is wrong with us. Yes we have a king size bed) watch me take care of it.

Well, I’m up now so I guess I’ll take G-man out since he’s up too and I don’t want him to have an accident. I scoop his long skinny body up and he stretches, as always. We head to the door and then squish. I step in something warmish and gooey and disgusting.

Kosmo had puked on the floor.

So I hobble into the hallway still toting Georgie. I sort of toss him outside, and go into clean my foot, and grab cleaning supplies for the pile of puke on the floor. Since Casey is still asleep (he was up late doing stuff for work), I can’t yet run the Bissel spotbot.  I head out with Georgie to be sure he takes care of all of his business. There’s no way I could handle another stinky pile of anything.

When we return inside, Georgie starts asking for breakfast. Crap. We finished every drop of dog food last night with the intention of getting more after puppy training today. That’s in three hours. There’s no way he’s waiting three hours to eat. In the meantime he’ll be barking, biting, and generally going berserk.

Perhaps he just wants to go outside again (pipe dream). I usher him outside, turning the lock on the door as we go out. Wait. Why did I do that? Now we’re locked out. Now I have to text my husband to come let us in. He’ll be really impressed with that one.

Door is unlocked. We go back in. Georgie has now reached level 7 of crazy, which includes trying to eat me.

A walk: Maybe that will help.

We head outside again. He resists my efforts to harness him, because his one track mind is stuck on food. Finally, I wrestle him into his harness and drag his scrawny butt out the gate (our puppy trainer would be very disappointed in us).

We head out on our little one mile loop. Eventually his reluctance wears off and he is happy to be out. He finds a stick to carry around for a bit. Life is good.

Then we’re back in our driveway and the goodness wears off. Unfortunately, none of my neighbor friends are up yet because it’s 7:20 on Saturday morning, so I can’t borrow dog food from them.

In the meantime, Casey has let Kosmo and Wanda out, so Georgie is attacking them (at least I got a break) and it’s basically mass chaos.

Georgie’s now at level 10: Desperation. He will do anything for food. Anything. All rules and training are out the window. Nothing is off limits. It’s scary.

And then the neighbor lady across the street who has three giant dogs is out in her drive way. I accost her and beg for a cup of dog food because I’m a bad dog-mom who didn’t plan ahead. She obliges. She has saved us all. Bless her. (I wish I knew her name but it seems too late to ask now–they’ve lived there like three years).

Finally, he settles.  For the most part he remained settled until puppy training.

This was him before we left for PetSmart: 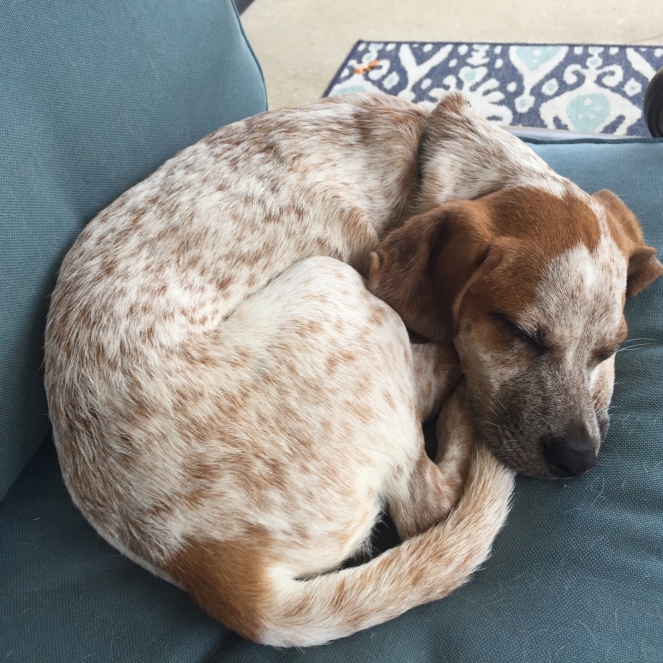 We made it through our hour of training–he was on his (mostly) best behavior and now he’s sleeping on the couch.

I made it through this terrible no good very bad morning.  I’m just hoping I can sleep in tomorrow.

Hope your Saturday morning was better than mine, y’all! 🙂

View all posts by loudenclearblog

One thought on “Worst. Morning. Ever. ”

There was an error retrieving images from Instagram. An attempt will be remade in a few minutes.