Since we don’t have kids, my husband and I both have a spare room to ourselves.  His is full of dead animals and camo, while mine has two comfy reading chairs, book shelves, and a closet full of memories.

When I opened the doors, I saw these: 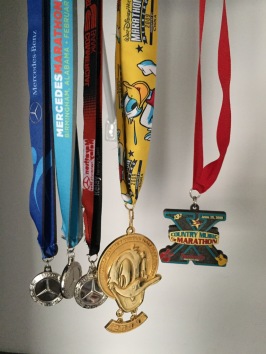 my running medals. But to be clear, you get these no matter how fast you run, which is good because I’m slow as a turtle running through a vat of molasses.

I hated running for most of my life, and then one day about 9 years ago I got a flier in the mail for Team in Training.  I could raise money for cancer research and be trained to run a half (or full–yeah right) marathon.  For whatever reason, I decided this seemed like a good idea.  Clearly I was suffering from temporary insanity.

The farthest I had ever run was the one mile you had to complete to pass the physical fitness test in school.  And I can walk pretty fast, so I probably didn’t even run that.   Deciding on a whim to run a half marathon was a bit of a stretch.

I went to school the next day and convinced my teacher friend to join me.  We went to the interest meeting and decided this seemed like a worthy challenge for us.

We were given a training singlet, lots of advice, a Saturday-morning running group, and a training schedule.  We had five or six months to prepare to run a half marathon in Walt Disney World (in exchange for raising a crap-ton of money!).  Since we were both new to running, Malerie and I chose to do the “run-walk” group.  By the end, we would be walking 1-2 minutes and running 5 minutes.

Despite a long history of running hatred, I grew to actually enjoy my training.  The Saturday morning runs, though VERY early and often times cold, were amazing.  I felt so good afterwards.  I’d go to the grocery store before most people were even out of bed. I’d come home and be full of energy, having experienced the great outdoors at first light, shared conversation with my new friends, and accomplished more in the morning than I ever had.

It wasn’t always fun, that’s for sure.  Come November and December, it was really hard to crawl out of bed in the dark, put on running clothes, and drive to our running trail, only to get out and freeze my buns off.  People always talk about the “runner’s high” but I think in the few years I dedicated to running, I experienced that feeling maybe twice.  Ever.

Honestly, raising the money was the hardest part.  It was rough, but we managed eventually.

When race weekend came, we were psyched! We flew into Orlando and rode the bus to our Disney hotel.  I think we got there on Friday, but I can’t remember. I know we were running on Saturday for the half because the full was on Sunday.

What I do remember is the morning of.  It was COLD.  SO COLD.  When you run, everyone says to dress as though it’s 20 degrees warmer, because that’s how it will feel when you run.  But that’s hard to do when you have to get up several hours before the race starts at 7am and it’s WAY colder than it would be at the beginning of the race, far less the end. 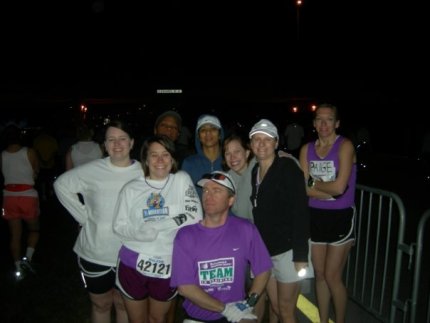 We all trained together–I was so thankful for these folks! 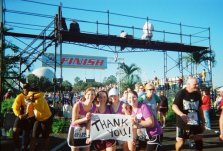 Our thank you to all of the people who donated. 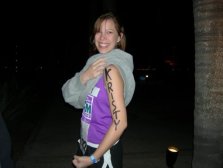 Feeling tough (ha!) with my name on my arm. It was fun to have people yell “Go Kristy, you can do it!” from the sidewalks.

The race started, and we were feeling good.  It warmed up, thankfully.  We stopped a few times for pictures, drinks, and bathroom breaks. We felt so good in the beginning that we ran too hard, which slowed us down later.  Additionally, my foot was KILLING me (Turns out I had plantar fasciitis but I didn’t know until I went to the doctor).

I remember finishing the race (two minutes over our hoped-for time but still with 3000 people behind us) and thinking, holy sh*t, people running a full are only half way done.  I also remember being SO hungry.  The TNT group had food for us, and I gobbled up multiple peanut butter sandwiches while wrapped up in my silver thermal blanket with my medal swinging from my neck.  It was the best sandwich I’d ever eaten in my whole entire life.  The lady handing them out felt sorry for me because I was  gushing incoherently about the delicious sandwich and she said, it’s peanut butter, and I said, I know, it’s amazing.

Well, if you’ve ever run a race, you might be able to relate to the feeling you get afterward: suddenly you want to run all the races!  5ks? Sign me up!  Another half? Why not?!

So, I signed up for the Country Music Half Marathon in Nashville (this was a BAD, BAD idea–maybe more on that another time) and ran a couple 5ks.  Over the course of about 3 years after that first momentous race, I ran numerous 5ks and participated in the Mercedes Marathon relay three times.  My couple years of running were great.  Besides shoes and running clothes (which I  might collect like other girls collect heels), it was a pretty cheap athletic activity.

But I’m a hobby-hopper.  Since running that first race, I’ve spent time running, belly dancing,  riding, kickboxing.  I like active hobbies (mam, I think that comes from you, what do you think?), so eventually running kind of petered out.  I still jog once in a while, but kickboxing is my current physical activity, and my weekend mornings are spent at the barn.

I think I like to know that running is always an option.  If I have no equipment, but time, space and shoes, I can always “go for a run” if I’m feeling insane again.

There were many other things I found in the closet, but I think I’ll save those for another post.  This went way longer than I expected.

I’m trying to write for 31 days straight with the Slice of Life challenge from Two Writing Teachers.  Wish me luck!!

View all posts by Kristy L